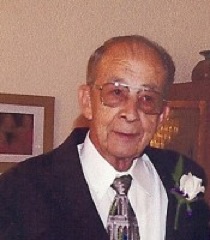 Candor:
Rex H. McLeod 79, formerly of Robbins, passed away Tuesday, January 10, 2012 at his home.
Funeral services will be held at 2:00 PM Friday, January 13, 2012 at Crossrords Baptist Church with Reverend Mike Holyfield officiating. Burial will follow in the church cemetery.
Mr. McLeod was a native of Montgomery County. He was a deacon in his church, loved the Lord, his church, his family and his many friends. Rex served for many years with the Robbins Rescue squad. He was a retired truck driver for Klopman/Burlington Mills. He worked with Kennedy Funeral Home and was the owner and operator of Robbins Flea Market until September, 2011. He was a son of the late Eldon Lee and Lilly VonCannon McLeod. His wife Lucy, son: Darrell McLeod and sisters: Grace Troller and Alma Cagle preceded him in death.
Rex is survived by his wife Peggy, of the home, daughter: Sandra, of Pittsboro; step son: Andy Carrick and wife Lisa, of Valdese and their children AJ, Jon, and Kayla Webber; Step son: Cari Carrick and wife Amy of Colorado and their children Cristin, Brittany and Jayden; Daughter in law: Donna McLeod, of Robbins; grandchildren: Bruce Diggs and daughter Hailey; Penny Culberson and children Leanne and Levi; Chris McLeod and wife Bonnie and their children Lauren and Sean; Dawn Marley and husband Erik and their children Bailea and Lana Grace; brothers: Paul, Odell, Hubert and Rayvon Mcleod; sisters: Edna Reynolds, Ruby Davis and Loretta Garner.
The family will receive friends from 6-8 PM Thursday, January 12, 2012 at Kennedy Funeral Home, Robbins, NC.
Condolences may be made to www.PinesFunerals.com
Kennedy Funeral Home is assisting the McLeod family.