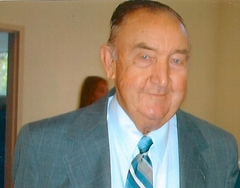 Richard Avery Hussey 84, went home to be with the Lord and his loving wife, Ruth, on Friday, October 30, 2015. Funeral Service will be 3:00 PM, Monday, November 2, 2015 at Smyrna United Methodist Church, where he was a member, with the Reverend David Woodhouse and Reverend Edwin Moore officiating.  Burial with Military Honors will follow in the church cemetery. Richard was a native of Moore County.  He served his country in the United States Army during the Korean War.  He worked at Carthage Fabrics, on the family poultry farm with wife, Ruth and ran a poultry shavings service.   Richard was a loving husband, father and grandfather. He was a faithful member of his church,  his Sunday School class and the United Methodist Men. He greeted everyone with a handshake and smile each Sunday. He was a member of the Woodmen of the World and the Robbins VFW.  Richard was a son of the late Jonah and Nancy Jane Brewer Hussey . He was preceded in death by his wife: Ruth Powers Hussey; sisters: Ollie Mae Garner, Mozelle Brady; brothers: Curtis, Elaster, Ray, Clayton and Harvey Hussey. Richard is survived by daughter: Donna Ward and husband David of Carthage, grandchildren: Jordan and Bryson, and many special nieces, nephews and friends.    The family will receive friends from 5 to 7 PM Sunday, November 1, 2015 at Kennedy Funeral Home, Robbins, NC and at other times at the home. Memorials may be made to Smyrna United Methodist Church Cemetery Fund, 203 Smyrna Church Road, Robbins, NC 27325.    Kennedy Funeral Home is assisting the Hussey family. Online condolences may be made at www.pinesfunerals.com