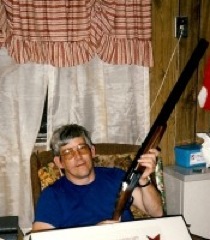 Randolph was a native of Moore County, an avid hunter and fisherman all his life. He was a member of the Glider Road Hunt Club and a lifelong member of the NRA. He was preceded in death by his parents R.O.and Lena Hogue Howard. Randolph worked in textiles at Carthage Fabrics for many years.
He is survived by his wife: Joann Cockman Howard of the home; a son Timmy Lawhorn and wife Deanna of Carthage; 3 sisters Diana Howard Williamson of Whispering Pines; Elizabeth Howard of Winston-Salem and Sarah Jennings of Newland; one grand-daughter, Paden Lawhorn.
The family will receive friends from 6-8 PM, on Saturday, January 21, 2012 at Kennedy Funeral Home in Robbins and other times at the home.
Condolences may be made to www.PinesFunerals.com