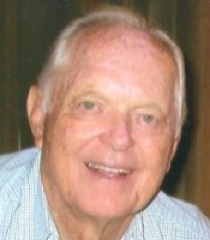 Ronald E. Anderson, 87, died Thursday, April 11, 2013 at Quail Haven Village in Pinehurst.
A memorial service will be held at 1:00 pm on Saturday, April 20, 2013, in the Chapel of FirstHealth Hospice, 251 Campground Road, Pinehurst, NC, with the Rev. Jim Langford officiating. Following the service an inurnment with military honors and reception will be held at Pinelawn Memorial Park, 1105 W. Morganton Road, Southern Pines, NC.
Born February 18, 1926 in Sabina, OH he was a son of the late Earl & Lora Leach Anderson. He attended Sabina High School and Miami University in Oxford, OH and graduated in 1952 with a degree in Physics and Mathmatics and was a Cadet Commander of the Air Force ROTC in his senior year and received a regular commission upon graduation. He spent 22 years in active and reserve duty with the United States Air Force on many assignments, including serving in World War II and retiring with the rank of Major from the United States Air Force.
He received his Masters Degree in Nuclear Engineering and worked at the Oak Ridge National Laboratories, the US Atomic Energy Commission and worked in advanced nuclear power systems for the Air Force and Space Applications.
Ron and Joyce lived in Wheaton, MD from 1960 to 1980. Upon retirement in 1979, Ron and Joyce moved to Southern Pines, NC. During his retirement they both enjoyed extensive travel to all points of the world.
Preceded in his death by his father and mother and loving wife Joyce, he leaves to cherish precious memories: (daughters) Heidi Anderson of Roswell, GA; Debbie Anderson and husband Bill Stonesifer of Dawsonville, GA; (son) Ronald Anderson and wife Patricia Anderson of Frederick, MD; (grandchildren) Bradley Anderson, Rachel Anderson, Steve Anderson and Gregory Anderson; (brother) Harold Anderson and wife Carolyn Anderson of Sabina, OH; (sister) Jean Slaven of Washington Court House, OH.
Memorials may be made to: FirstHealth Hospice Foundation, 150 Applecross Road, Pinehurst, NC 28374