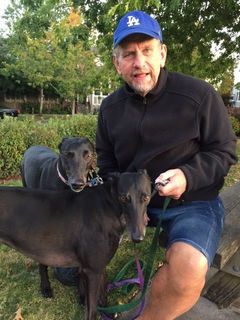 He began working with MidSouth Airlines and had a long career in the airline industry retiring from American Airlines at Raleigh-Durham International Airport one year ago. A longtime resident of Apex and working at RDU many years, Ron never met a stranger and everyone has a story to share about talking to him when passing through the airport.

An avid runner, marathoner, animal lover, concert-goer and sports fan, his biggest cheers were for his daughter Lindsay Katherine, followed by the LA Dodgers.

Memorials may be made to Greyhound Friends of North Carolina (greyhound friends.com ) or Moore Humane Society ( moorehumane.org ).

The family will receive friends from 6 to 8 PM, Saturday, October 21, 2017 at Kennedy Funeral Home.

Kennedy Funeral Home is honored to serve the Hussey family.