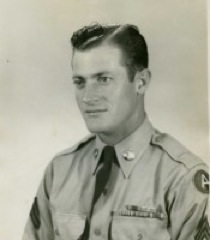 Cameron, NC
Roy M. Wallace, age 86, of Cameron, died Tuesday (November 12, 2013) at Peak Resources - Pinelake in Carthage.
A native of Dobson, NC, Roy was a son of the late Sidney H. and Essie M. Wallace. He was a retired Staff Sergeant from the US Army and served with the 536th Engineering Field Maintenance Company during the Korean Conflict. Following his service in the Army, he worked for Civil Service as a Chase Photographer at Pope Air-Force Base.
Roy was a member of John Boyd VFW Post 7318. He was a 32nd Degree Mason, member of the Scottish Rite and Shriners, and Past Master of Sanford Lodge 151 and Southern Pines Lodge 484.
He served for many years as the Republican Registrar for the Town of Cameron and as Chief of the Cameron Volunteer Fire Department.
He was preceded in death by his wife Della Wallace, sisters Gladys Ring, Vera Campbell, Ruby Hicks, and brother Glenn Wallace.
He is survived by: son Leonard Wooten of Cameron; daughters Pat Greene of Cameron, Tammi Blake and husband Dale of Raeford, Tina Lewis and husband David of Sanford; sister Lena Rackley of Sanford; six grandchildren and seven great-grandchildren.
The family will receive friends at Fry and Prickett Funeral Home from 6:00 - 8:00 PM Friday and a private graveside service will be held at a later date.
In lieu of flowers, memorials may be made to: The Masonic Home for Children at Oxford, 600 College Street Oxford, NC 27565. www.mhc-oxford.org
Fry and Prickett Funeral Home is serving the Wallace family.
Condolences: PinesFunerals.com