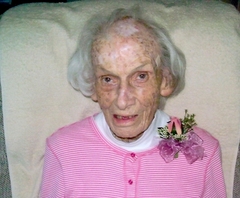 Ruby Marley Sanders 93, died Saturday, April 23, 2016, at her home, surrounded by her family. Funeral service will be held at 2:00 PM on Tuesday, April 26, 2016 at First Wesleyan Church, with the Reverend Sam Swinney officiating. Burial will follow in Pine Rest Cemetery.     Ruby was a graduate of Elise High School. She worked in the textile industry and was a homemaker.  She loved the Lord, her family, church, community and all her friends.  She enjoyed music, needlepoint, beach trips and the simple joys of life, children and ice cream. She was a daughter of the late Ben and Nettie Maness Marley and was preceded in death by her husband Norman Sanders, son: Gary Tucker, sisters: Amy Stutts, Beulah Comer, Gladys Brown; brother: “Bink” Marley. Ruby is survived by daughter:Janet Sanders, of Robbins; 3 grandchildren, 4 great grandchildren, 4 great great grandchildren and many friends. The family will receive friends from 6 to 8 PM, Monday, April 25, 2016 at Kennedy Funeral Home and at other times at the home. Janet extends a special thanks to the staff of Liberty Hospice and also the family, friends and neighbors that have cared for and supported “Miss Ruby”. Condolences may be made to www.pinesfunerals.com Kennedy Funeral Home is serving the Sanders family.