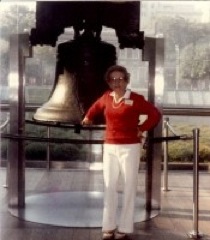 Ruby Jane Spinks
Robbins:
Ruby Jane Spinks 91, of 215 South Oak Street, died Tuesday March 15, 2011 at FirstHealth Moore Regional Hospital.
Funeral service will be held at 2 PM , Saturday March 19, 2011 at First Baptist Church in Robbins with the Rev. Gene Booker officiating. Burial will follow in the Bennett Baptist Church cemetery.
She was preceded in death by her parents, Massingill R. Bullard and Hattie Thomas Smith Bullard; and her beloved husband Paul Spinks; brothers, Phillip Bullard; William David Bullard; and Harold Bullard; sister, Joanne Hogan and a nephew Darren Bullard.
In 1942 she married Paul the love of her life, together they made their home in Robbins where she made many friends. Anyone who has ever known Ruby knows that she was always willing to lend a helping hand. She was a homemaker and later in their marriage, she became a travel guide for Asheboro Coach Company. She and Paul traveled all over the world, making many friends along the way. Paul died in 1991 and she has now gone to be with him again.
She is survived by neices and nephews; Richard Bullard and wife Cheryl; Michael Bullard; Angela Binkley and husband Terry; Johnny Hogan and wife Becky; Clifford Hogan and wife M.J.; Thomas Hogan and wife Becky; Evon Wilkes and husband Lonnie.
The family will receive friends at the Robbins First Baptist Church 1 hour prior to the service.
Memorials may be made to the charity of the donors choice.
Condolences may be made on line to www.pinesfunerals.com
Kennedy Funeral Home is serving the Spinks family.