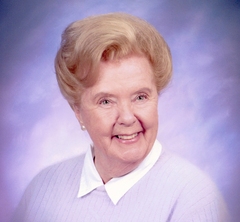 Ruth Arlene Pope died Friday, December 26, 2014 at her home in Foxfire, NC.   Funeral service will be 2:00 PM Monday, December 29, 2014 at McDonald's Chapel Presbyterian Church, with the Reverend Robert Whitehouse officiating.  Burial will follow in the church cemetery.   Ruth was born in Lynn, Massachusetts the daughter of the late William H. and Catherine Himmelman Holden. She was the wife of the late Professor Clarence J. Pope.  They resided in Andover, Mass. for many years prior to his retirement.  They had been married 55 years at the time of his death., in 1997. Ruth was a graduate of Bradford Academy and attended the University of Massachusetts.  She danced for the Boston Ballet and did screen tests in Hollywood during WW II.  Ruth also taught Cosmetology in Boston.   Ruth is survived by beloved son, James H.Pope, of Foxfire, NC.   The family will receive friends at Powell Funeral Home on Sunday from 5:00 - 7:00 pm and other times at the home.   Memorials may be made to McDonald’s Chapel Presbyterian Church, 1374 Foxfire Road, Aberdeen, NC 28315.   Powell Funeral Home is assisting the Pope family.   Condolences: PinesFunerals.com