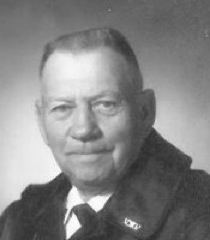 CARTHAGE
Sam D. Prim, age 83, of Farm Life School Road died Sunday (April 8, 2012) at FirstHealth Moore Regional Hospital in Pinehurst.
The family will receive friends at the home 5:30 pm until 7:30 pm on Wednesday, April 11, 2012. A private memorial service will be held at a later date.
A native of Yadkin County, he was the son of the late Jesse M. and Nina Poindexter Prim. He moved to Moore County in 1949 and was a tobacco farmer. A former member of the Carthage Rescue Squad, he became a founding member of the Whispering Pines Rescue Squad where he served for forty years. He went to work with the Whispering Pines Police Department in 1972 and retired in 1993 after serving 21 years as Chief of Police. In addition to his parents he was preceded in death by two brothers, Wayne Prim and Carl Prim.
He is survived by his wife, Ruth Moser Prim; a daughter, Julie McDonald and husband, Tim; two sons, Robert Prim and wife, Robin, Andrew Prim and wife Erin all of Carthage; four sisters, Connie Williams, Vivian Evans and Polly Smith all of Carthage and Velma McLaughlin of Randleman; four grandchildren, Jesse Prim, Sam McDonald, Abby Prim and Cody Prim.
Fry & Prickett Funeral Home is serving the family.