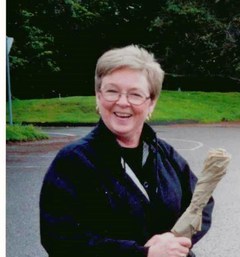 Sacramento, CA. Sara Dykstra was born December 2, 1944 to Myrtle and Charles Von Metzger of Vass, North Carolina. Sara passed away in Sacramento, California from ataxia on June 23, 2017. The ataxia was caused by the shrinking of the cerebellum, which is part of the brain. Sara had ataxia for approximately seven years. Unfortunately, its progression greatly affected her coordination, balance, swallowing, speech, and appearance. Sara spent her formative years in Vass, NC. She married Bruce Dykstra in 1966; they moved to Sacramento in 1967. Although Sara and Bruce divorced, they remained good friends throughout Sara’s life. After coming to Sacramento, Sara became a Histotechnician. She worked in several labs, but spent most of her working years in the pathology lab at Mercy Hospital. Sara retired in 2006. Sara will be buried next to her mother, Myrtle, her grandfather, Neal McMillan, and her sister, Sandra Stephens . She is survived by her nieces, Karen Stephens (soon to be married to Scott Jensen) of Sparks, Nevada, and Destiny McCorkle (Ryan) of Box Elder, South Dakota. Sara has three half-brothers, Paul (Rena) and Eric (La Vere) Von Metzger and Jack (Kay) Manni. Sara also leaves her first cousins Bonnie (Brian) McLaughlin of Chimacum, Washington, and Bob Burleson of Newark, Ohio. But, the one that will miss Sara this most is Sparky, her dog and best buddy. Sara leaves many relatives and friends in North Carolina, and friends in California. She was part of a group that met once a month for dinner, and traveled together to Hawaii, Mexico, and several cities along the coast of California, and various wine regions. The group includes Judy Johnson, Darlou Ernst, Mike Grady (deceased) from Sacramento, and Karla and Stan Carson, and Jan and Mike Halsey from Stockton. The group is going to greatly miss Sara’s presence. Sara’s family and friends would like to thank her caregivers, Sandra Orden, Jessie Ramos, and Preethy Kudilil, for all their care and concern for Sara. Sandra Orden deserves a special thank you, as she went above and beyond a caregiver’s usual duties. Sandra became Sara’s guardian angel; she took over all the things in Sara’s life that Sara couldn’t do for herself. Sara is direct descendant, on her mother’s side, of the Shaw family. Charles Shaw built his home in Southern Pines in 1821. Over the years, many of the Shaws were prominent members of Southern Pines society. The Shaw house is now a historic landmark. Donations to honor Sara may be made to the Moore County Humane Society, 5355 NC-22, Carthage, NC 28327, or a charity of your choice. Powell Funeral Home and Crematory of Southern Pines, NC and W.F. Gormley & Sons Funeral Chapel of Sacremento, CA. is assiting the family