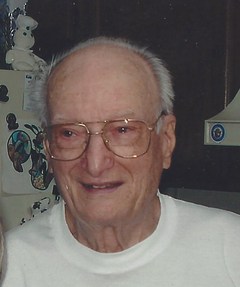 Southern Pines, NC Sigismund F. Andres, 98, of Southern Pines, NC, and formerly of Oil City, PA died Tuesday August 2, 2016 at First Health Hospice House in Pinehurst, NC. A graveside service with Inurnment of both his and his wife’s cremains will be held at a later date in Grove Hill Cemetery, Oil City, PA. Born November 17, 1917 in Chicago, IL, he was the fourth son of the late Anthony A. and Maria Schiffer Andres. He graduated from Oil City High School and worked for many years as a baker at Andres Bakery which was started by his father and uncle. After leaving the bakery, he owned and operated Andres (Venango) Ice and Coal Co. for several years until selling the business and working as a highway construction inspector for PENNDOT. His last job prior to retiring to Southern Pines in 1983 was working as a structural steel painting inspector for KTA of Pittsburgh. In addition to his parents, he was preceded in death by his beloved wife of 62 years, Winifred Tarr Andres, daughter-in-law Ann Allsbrook Andres and his three older brothers John Andres, Fred Andres, and Henry Andres. He is survived by one son, Dave Andres and wife Renate of Rockingham, NC, two granddaughters, six great grandchildren, and numerous nieces and nephews. Mr. Andres was of the Roman Catholic faith. He was a past member of the Southern Pines Lions Club and held several offices including president. Memorials may be made to the Lion’s International Foundation or the charity of one’s choice. Powell Funeral Home of Southern Pines is in charge of the arrangements. Online Condolences may be made at www.pinesfunerals.com