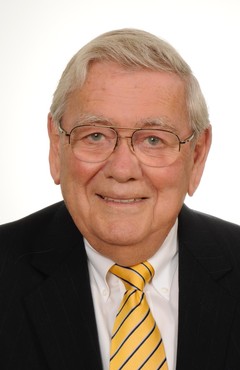 T.T. “Tommy” Prickett, II, age 84 of Carthage died Tuesday, September 26, 2017, at his home.   Funeral services will be 11:00 am Saturday, October 7, 2017 , at Carthage United Methodist Church with the Rev. Jim Bolyard, The Rev. Dr. William J. Maness, Jr., and Deacon Tom Porter officiating. Burial will follow in Cross Hill Cemetery.   Born in Sanford on March 20, 1933, to the late Turner Thomas and Saralyn Jacobson Prickett, Tommy grew up in Raleigh. He graduated from Broughton High School and attended NC State University. While in Raleigh he worked for the local radio station WPTF and also for Brown Wynne Funeral Home. He soon decided that funeral service would be the career path he would follow. He moved to Cincinnati where he attended Cincinnati School of Embalming (Now Cincinnati School of Mortuary Science). After completing his schooling and obtaining his license in Funeral Directing and Embalming he went to work for Forbis and Murray Funeral Home (now Forbis and Dick Funeral Home) in Greensboro. After that, he worked in Red Springs for Waverly Barrum. In 1957 he moved to Carthage and bought R.G. Fry and Son Funeral Home and that is where he settled for the rest of his life.   In 1969 he bought the old dilapidated Muse house on the corner of Rockingham and Saunders Streets in Carthage. Thinking the house could be restored to its original beauty from 1892, Tommy would spend the next 18 months working with others day and night to create the all-new Fry & Prickett Funeral Home. Finally, on April 18, 1971, the doors opened and the hard labor paid off as the Carthage community raved over the new facility. Today the evidence and memories of Tommy’s hard work resonates everytime the doors are open.   Later in life, Tommy had the opportunity to expand his business with his friend and business partner of 27 years Robert Nunnaley. Together they purchased Kennedy Funeral Home in Robbins and Powell Funeral Home & Crematory in Southern Pines which allowed them to serve all areas of Moore County.   This year marked 60 years of service for Tommy to the Carthage and Moore County communities and while his declining health has prohibited him from working the last few years he has still remained a pillar in the community and a mentor to the staff at the funeral homes. For 60 years Tommy worked in Carthage serving the community in all their needs. He always said, “Carthage has been good to me.” And may we add Tommy was good to Carthage though he never talked about it. Even in his last days, his concerns were to be sure his family and friends were going to be okay once he was gone.   Tommy was active in the community serving in the Carthage Jaycees, the Rotary Club of Carthage, the Carthage Volunteer Fire Department and the Carthage Century Committee. He was also proud of his service to various boards including FirstHealth Moore Regional Hospital, BB&T, Moore County Chapter of American Red Cross and Carolina Eye. He was the 1998 recipient of the Citizen of the Year award from the Rotary Club of Carthage. Tommy was also an active member of Carthage United Methodist Church where he served on various committees and boards.   Tommy was a caring and compassionate man who was well loved by all who knew him. The countless things he secretly did for others will never be known. He truly lived life by putting others first.   He is survived by his wife of 29 years Jean Yarborough Prickett; children Lyn Prickett Austin and husband Van of Pinehurst, Kathy Prickett of Carthage, Turner T. Prickett, III and wife Karen of Raleigh, Bobby “Bocephus” Cooke of KY; sisters Ethelyn P. Taylor of Carthage, Saralyn P. Hawkins and husband Bill of Hixson, TN; a niece who he raised as his daughter Gelynda Underwood and husband Fess of Carthage; grandchildren Nichole Prickett MacVittie and husband Eric, Zac Cooke. A special and caring nephew David “Jeffer” Craft and wife Maggie; great-niece Katy “Snicklefritz” Craft. Tommy also has extended family in Texas who loved and adored him, as well as a former daughter in law Kristin Fuhrmannek Swiertz and husband Eric of Wisconsin.   The family will receive friends at Fry & Prickett Funeral Home on Friday, October 6 from 6:00 - 8:00 PM and other times at the home.   Memorials may be made to Carthage Fire Department 4396 HWY 15/501, Carthage, NC 28327 or to Carthage Century Committee, Post Office Box 460 Carthage, NC 28327.