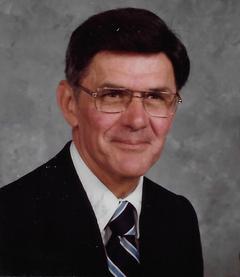 Frank was born March 2, 1929 to C. Franklin Grill, Sr. and Mildred Holtz Grill in Baltimore, Maryland.  He attended public schools in Arbutus and Catonsville, graduating from high school in 1945.  After a brief work career he left home to study at Asbury College in Wilmore, Kentucky, graduating in 1953.  After serving some small churches in Kentucky as a student pastor, Frank was accepted at Duke Divinity School, where he graduated in 1956.  His career as a minister in full connection began in Burgaw and Watha in that year.  From 1953 to 1994 he served pastorates in eastern North Carolina.

In August 1971 he married his beloved wife Helge, a schoolteacher from Portsmouth, Virginia.  In 1973 he was asked to join the United Methodist Conference Council on Ministries Staff in Raleigh in the areas of stewardship, building programs, finance, missions and history.  In this job he travelled locally and nationally and was able to use his organizational skills and his interest in history.

Frank loved his work, visiting and caring for his congregations, but he was also a proficient researcher and writer.  In 1966 he wrote the book Methodism in the Upper Cape Fear Valley.  In 1976 he co-authored a NC Conference Historical Directory.  He also wrote several church histories.

As a person he was curious about the world around him and had a wonderful sense of humor.  Throughout his life he loved music and singing.  He was a devoted family man.  He and Helge retired to Southern Pines in 1994.

In addition to his parents, he was preceded in death by his sister Betsy G. Mealy.

Surviving are his wife Helge, his daughter Natalie George and her husband Robert of Greensboro, and grandchildren Gavin and Allison.
His funeral service will be conducted by Rev. Tommy Sweeley and Rev. Chae Albright at 3:00 p.m. on Sunday at Southern Pines United Methodist Church.

The family is especially grateful to the caregivers who have helped serve Frank during the last few years.

Online condolences May be made at: PinesFunerals.com