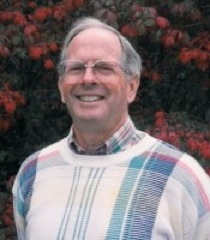 PINEHURST
Thomas C. Crump, age 83, died Tuesday, October 23, 2012 at Pinehurst Health and Rehabilitation Center in Pinehurst.
A memorial service will be held at 2pm Sunday, October 28 ,2012 ,at the Community Presbyterian Church in Pinehurst, with the Reverend Rod Stone officiating.
Born and raised in Wagram, NC, he was the son of the late Walter T. Crump and Lois Rhodes Crump. He attended Oak Ridge Military School and graduated from Catawba College in Salisbury, NC. Tom spent four years in the Air Force at Lowry Air Force Base in Denver, CO and went on to become the owner of The Conquest Company. He retired to Dana Point in Southern California. In 1986, he married Judith Hughes and they moved to Pinehurst in 1995. During his retirement, he enjoyed playing golf, and was active in the Community Presbyterian Church as a Stephen's minister. Tom worked part-time as a Funeral Associate for Powell Funeral Home in Southern Pines and was a Heart Ambassador for the Reid Heart Center at FirstHealth of the Carolinas.
In addition to his parents he was preceded in death by a brother, Thad Crump.
He is survived by his wife of 26 years, Judy Crump; her two sons, Eric Hughes and wife Suzie of San Carlos, California; and Mark Hughes and wife Stephanie of Alpharetta, GA; a sister, Susan McArn and husband, Hugh, of Laurinburg; three granddaughters, Grace, Lily and Stella; and three grandsons, Bryce, Luke and Jack; and several nieces and nephews.
Memorials may be made to Community Presbyterian Church, PO Box 1449, Pinehurst, NC 28370 or FirstHealth Hospice, 150 Applecross Road, Pinehurst, NC 28374.
Powell Funeral Home and Crematory is serving the Crump family.
Online condolences may be made at www.PinesFunerals.com