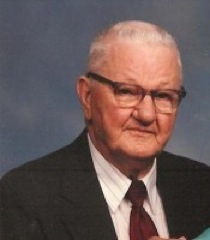 Thurman D. Maness, 101, died Sunday August 8, 2010 at St Joseph of the Pines Health Center.
Funeral services will be held at 11:00 a.m. on Wednesday August 11th at Pleasant Hill United Methodist Church with Rev. Jim Stalnaker and Rev. Clarence Garner officiating. Burial will follow in the church cemetery.
Born July 27, 1909 in Moore County, he was a son of the late Reuben and Annie M. Maness and husband of 61 years to the late Verdia Wallace Maness. He was preceded in death by his four sisters, Kate, Martha, Mary, and Tonie, eight brothers, Bevin, John, Frank, Quince, Dewey, Coble, Mack and Hurdle.
Thurman graduated from Elsie High School in 1929 where he was valedictorian, retired as Supervisor from Robbins Mills and continued woodworking after his retirement, was a member of the Sons of the Revolution, worked as a Scoutmaster and with the Boy Scouts of America for over 50 years.
He loved history and worked with others on the program 'You Are There' for CBS featuring stories and records of men serving in the Moore County Confederate Army and with friend Lacy Garner, they published a collection of Moore County short stories titled ' Tales from the Upper End of the County', and received 'The Order of the Longleaf Pine' award from the State of North Carolina. He donated his collection of historical documents to the Moore County Library in 2002 and was a faithful member of Pleasant Hill United Methodist Church in Robbins for 77 years where he served as Treasurer, Sunday School Superintendent, Sunday School Teacher, and other positions.
Surviving are his son, Robert Maness and wife Cathy of Woodburg, GA, Grandson, John Maness and wife Rachel of Hoschton, GA, Great Grandsons, Aaron and Jacob of Hoschton, GA fourteen nieces and twelve nephews.
The family will be receiving friends from 6 to 8 p.m. Tuesday at Kennedy Funeral Home in Robbins.
Memorials may be made to Pleasant Hill United Methodist Church Cemetery Fund, 1595 N. Moore Road, Robbins, NC 27325 or to Tabernacle United Methodist Church Cemetery Fund, P. O. Box 395, Robbins, NC 27325.