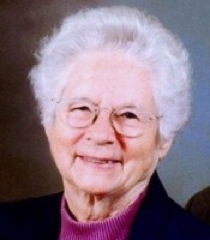 Cary, NC
Ursula Tomczak Ruba, age 81 died Sunday (November 14, 2010) at her residence following a hard fought battle with cancer.
Funeral services will be 2:00 PM Wednesday at Pittsboro Seventh-day Adventist Church where she was an active member. Pastor Glen Garver will officiate. Burial will follow in Apex Cemetery.
Born in Neuendorf Germany, she was the second daughter of Walter and Emma Tomczak and a life long Seventh-day Adventist. After finishing basic education Ursula got a job at an electro company where she learned to do technical drafting. In 1949 she marrried Walter Ruba. As refugees they saw no future in Germany and applied for immigration visas to the United States. In 1953 a farmer in Camino, California, sponsored their trip to their new homeland. They worked together for 5 years on the farm and fruit orchard.
After their work in California they moved Memphis, TN. In 1968 they where called to mission service in South Africa. During this time Ursula stayed at home to care for their children. After nine years of mission service in Africa the Ruba's were called to Canada. While in Oshawa, Canada she worked 10 years full time in the bindery and shipping department at the SDA publishing house.
In 1990 the Ruba's retired and moved to Cary, NC to be closer to their son and his family. Ursula loved her new home and enjoyed working in her yard. She planted flowers, selected fruit trees and planted a vegetable garden. In the house she had no idle hands and was experienced in sowing, quilting, painting and making all kind of art work for the home. She also gave countless items away as gifts.
In addition to her husband of 62 years Walter, she is survived by: a daughter, Karin von Maltitz and husband, Eddie of South Africa; a son, Norbert Ruba and wife Lizbeth of Cary, NC; a son Gary Ruba and wife, Janelle of Martinville, IN, a sister, Isle Tomczak of Cary, NC, Christa Wegener of Hamburg, Germany; eight grandchildren.
The family will receive friends from 6-8 pm on Tuesday at Apex Funeral Home.
Online condolesences may be made at: www.PinesFunerals.com