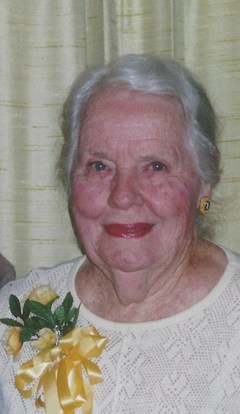 A graveside service will be held on Saturday, Oct. 29th at 2 pm at Bethesda Cemetery in Aberdeen, NC.

Velda Pullen was born on June 20, 1921 in Barnardsville, NC. to Samuel and Loretta Whitaker. She graduated from Bob Jones University with a BA in Education. On July 2, 1950, she married Charles E. Pullen. They were married for 57 years.

Charles and Velda Pullen lived in Aberdeen for many years. She was a teacher in the Moore County Schools, sharing her love of learning with her students. Gardening, reading, playing the piano, and singing hymns were her favorite pastimes.  But most of all, she treasured time spent with family and friends.

Velda was preceded in death by her parents, Samuel Robert and Mary Louetta Hensley Whitaker, her daughter, Joan M. Pullen, and 6 brothers and 7 sisters.

She is survived by her daughter, Beth Pullen Evans, of Jamestown, NC.