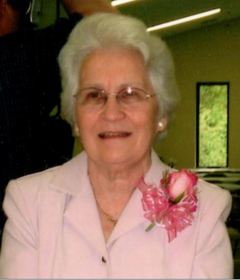 Vera McCaskill Freeman passed away at her home on October 28th, 2017 at the age of 79. Vera was a native of Moore County and was born in Hemp, NC now known as Robbins. She was first a Mother and homemaker, but opened her home up to those who loved and desired to learn to play the piano. Her love of music and longing to serve the Lord led her to use her talents as a pianist and organist. She played for many weddings and funerals throughout the years. Additionally, she volunteered countless hours and worked with girls who resided at Samarkand Manor after her retirement from the United States Post Office in Biscoe, NC. Vera was preceded in death by her parents, Jasper and Martha Stutts McCaskill, brothers;Glenn and Arthur McCaskill, sisters Hazel M. Clendenin and Ann M. Slade. Vera is survived by her husband Allison Freeman of 62 years, along with her children; Portia Clark (Terry), of Biscoe, NC; Joan Kennedy (Dale), of Robbins, NC; Tim Freeman (Cindy), of Biscoe, NC; Todd Freeman of Pinehurst, NC and Amanda Freeman of Pinehurst, NC. She is also survived by a sister Kinzia Ritter (Greg), of Robbins, NC as well as many nieces, nephews, extended family and friends. Vera was blessed to have seven grandchildren; Michael Clark (Sara), Renee Robbins (Jesse), Ginny Clark, Michael Kennedy, Karen Kennedy, Miranda Freeman and Jacob Freeman along with four great- grandchildren, Carly Ann Clark, Claire and Regan Robbins, and Mira Honeycutt. A celebration of life will be held at 2:00 p.m. on Monday, October 30th, 2017 at Tabernacle Baptist Church, Candor, NC with Pastor Emerson Woodall, Pastor Jack Phillips and Pastor Michael Free officiating the service. Pastor Garry Clark will officiate the music. Interment will follow at Big Oak Christian Cemetery where she was a long time member. The family will receive friends from 6-8 p.m. on Sunday, October 29th, 2017, at Big Oak Christian Church in Biscoe, NC. The family will also meet at the home of Portia and Terry Clark. In lieu of flowers, donations can be made in Vera’s memory to Big Oak Christian Church Cemetery, Tabernacle Baptist Church music program, or First Health Hospice in Pinehurst. Condolences may be sent to www.pinesfunerals.com