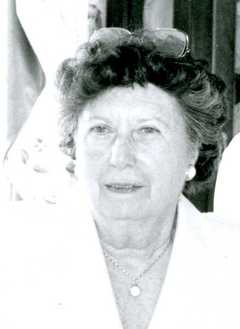 Virginia Cary Lancaster McDonald, age 89 of West End died Monday (October 6, 2014) at her home. A graveside service will be held 11:00 AM Thursday at West End Cemetery conducted by the Rev. Dudley Crawford. A native of Richmond VA, she was the daughter of the late George Graham and Virginia Coleman Lancaster. She graduated from The Richmond Professional Institute of William and Mary in Richmond (now Virginia Commonwealth University). In 1949 she married her husband, the late Allan McDonald, and moved to West End, NC where she would live the rest of her life. She was active in local civic organizations including the Southern Pines Garden Club as well as a charter member of the Seven Lakes Yellow Rockers square dancing organization. She was devoted to her family including her two sons Angus McDonald of West End and Cary McDonald of Chapel Hill. In addition to her sons, she is survived by her five grandchildren, Logan McDonald, Charlotte McDonald, Alexander McDonald, Anne McDonald & Connor McDonald. Memorials may be made to: FirstHealth Hospice Foundation, 150 Applecross Road, Pinehurst, NC 28374. Fry and Prickett Funeral Home is assisting the McDonald family. Condolences: PinesFunerals.com