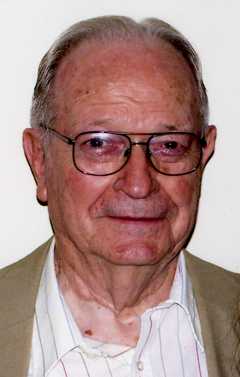 William Jackson Morgan of Vass died Tuesday, April 11, 2017 at the age of 90.   A graveside service will  be 11:00 am Saturday at Johnson Grove Cemetery in Vass conducted by Pastor Wendell McGee.   Born on July 12, 1926 in Carthage, he was a son of the late Nealie Jackson and Martha Jane Caddell Morgan. He attended Elon College and upon returning to Moore County was employed by The Bank of Pinehurst, which became Carolina Bank. He met Elizabeth Laura Shankle and they married in 1949. Jack and Betty made their home in Vass, where he opened a branch of Carolina Bank and  they raised their family.   Jack was active in community work including Carthage Jaycees, Vass Lions Club, troop leader of the Vass Boy Scouts, School Board appointee for planning and building Union Pines High School, a member of the Board of Trustees for Moore Regional Hospital and an elder with the Vass Presbyterian Church. In 1988 he retired as a Regional Vice President with BB&T with 43 years of service having only changed banks due to mergers. Jack enjoyed his retirement with Betty at their beach house, being with family, traveling and working in the yard. He will be missed by his family and friends.   He was preceded in death by his brother Joseph Genrty Morgan and his step grandson Brian Collins.   He is survived by his wife, Betty; children Bruce Morgan and wife Cynthia, David Morgan and wife Glenda, Martha McAninch and husband John and Neil Morgan; grandchildren Laura Roberts and husband Dan, Jessica McAninch, Robert Lassiter and wife Mallory, Justin Lassiter and fiance Megan, Matthew Jones and wife Marlena, Katie Collins and Shawn Collins; great-grandchildren Jessy Roberts, Nathan Roberts and Madison Lassiter.   The family will receive friends at Fry & Prickett Funeral Home from 6:00 - 8:00 PM Friday and other times at the home.   Those who wish may make memorials to Vass Presbyterian Church, P.O. Box 548, Vass, NC 28394.   Online condolences: PinesFunerals.com