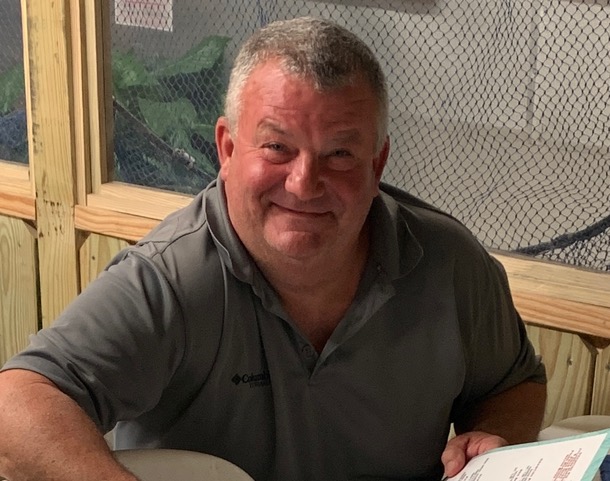 Born on the former Richards-Gebaur Air Force Base in Missouri, Chip grew up in Myrtle Beach, SC after his father’s retirement from the Air Force when Chip was a toddler.  He attended Myrtle Beach High School where he was a starting linebacker on the football team, one of the Captains during his senior year, and part of the State Championship winning team in 1980.  A natural athlete, Chip was an avid surfer when he was younger and in his 20’s, he began playing rugby.

Chip graduated from Georgia Southern College with a Bachelor of Science degree, moved to California and eventually settled in Los Angeles.  He started free-lancing in set construction, working on numerous commercials and music videos.  He enjoyed the sunny California weather and the outdoor lifestyle, and during his free time could be found biking, hiking, fishing and white water rafting with friends in Northern California.

Chip returned to Myrtle Beach in the mid-90’s and after working in construction with a friend from high school for several years, he opened his own business.  He gained a reputation for quality work and built up a loyal client base.  Chip never lost his enthusiasm for the outdoors and over the years, he also developed a love for NASCAR racing.  In 2019, he began working as a crew member with the McCumbee Elliott Racing Late Stock Model team, working as many races as possible.  Chip enjoyed the camaraderie and loved being part of the team, celebrating the successes and learning from the losses.

The saying “He never met a stranger.” is aptly applied to Chip.  He was kind and thoughtful and would never hesitate to help anyone in need.  He was smart, fearless, stubborn, and an incredibly hard worker.  He loved to laugh, was a great cook, never said no to any kind of get together, never hesitated to make guests and friends alike feel welcome, and loved his animals.

Chip was preceded in death by parents Jack and Louise (Hendren) Herrington, brother Steven Herrington, grandparents William and Maude (Blue) Hendren and Joseph and Samanthia (Sumrall) Herrington.  He is survived by his sister Suzanne Herrington, and numerous cousins and good friends, all who will miss him dearly.

A graveside ceremony will be held at Noon on Saturday, April 10, 2021, at Eureka Presbyterian Church Cemetery, 2185 Farm Life Road, Carthage NC.  In lieu of flowers, donations can be made to Whiskers Animal Rescue and Sanctuary, P.O. Box 70066, Myrtle Beach, SC, 29572 or if you can, adopt a pet in need.

Fry and Prickett Funeral Home is serving the family.