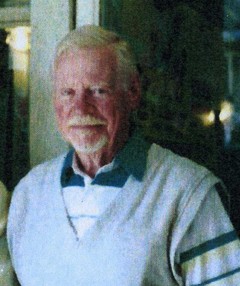 Chester Sterling Shira passed into God’s hands on 28 February 15.  He was born 29 Oct 27 in Zanesville, Ohio.  Preceded in death by his parents George Alvin and Helene Mossman Shira and his lst wife Dolores Murphy.  Chet was an accomplished saxophonist in high school, local bands and during his two years in the Navy in an all-services band entertaining troops in the Pacific  at the end of WWII.  Chet received his Bachelor’s and Master’s degrees from The Ohio State University in Welding Engineering, where he was a member of the Theta Tau Fraternity.  He later received The Outstanding Alumnus Award from the College of Engineering.  Moving to California, he worked on the rocket engine systems for the Apollo program at Rocketdyne.  He established Shira Welding Supply in San Diego.  He started Advanced Robotics in Columbus Ohio, where his met his wife Barbara Baker Bezouska.  They moved to San Diego and started Carbite Golf, where he was member of the San Diego Golf Club.  He held 19 patents in the golf industry. Chet was an excellent golfer, having played with Billy Casper and other well-known payers.  As a Metallurgist, one of his favorite organizations was IMECA (Independent Metallurgists of California).  After retiring, Chet and Bobbie moved to Southern Pines, her home town.   Chet was a member of the Southern Pines Elks Golf Club and a member of The Ohio State Alumni Club of the Sandhills.  He will be sadly missed by his loving wife, son Kevin (Judy), daughter Kim (Leo), Stepchildren Julie (Rick) Watson of Dallas, Charles (Christy) Bezouska of El Segundo CA, Richard (Tina) Bezouska of  Bexley, OH and Bo (Tricia) Bezouska of FT Bragg/Carthage, 12 grandchildren, 4 Great-grandchildren; his brother George Alvin Shira Jr. of Anderson, SC.